It is believed that the early wall of the village is prior to the Roman invasion of the Iberian peninsula. 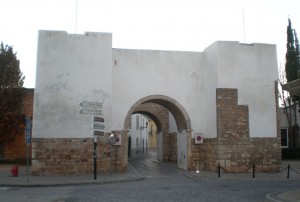 It was rebuilt in the ninth century, during the reign of Ben Bekr, prince of a small Muslim kingdom which became independent of the Emirate of Córdoba.

During the Almohad period they were erected two towers albarrã one of the main entrances, set now known as “Arc rest”.

With the conquest of the city by the forces of Afonso III of Portugal (1249), its walls were rebuilt. At this stage, the urban fabric corresponded to two distinct areas:

the so-called “Vila Adentro” (now the parish of Santa Maria), where were located the worship, the Jewish Quarter and the homes of Christians; and the “Ribeira”, residential area of ​​social class higher level.

In the current downtown installed the Mouraria, where since 1269, the Moors were forced to reside.

Later, under King John III of Portugal, this determined, in 1541, to repair the walls of Faro. These would, however, severely punished when the invasion Robert Devereux, 2nd Earl of Essex (1596), and immediately begun its repair, which lasted for decades.