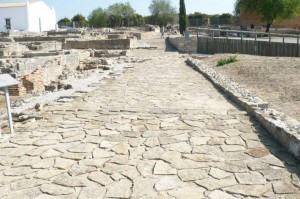 History / Background History:Milreu is the testimony of an important “villa” rustic Roman séc.I inhabited since the Christian era, with traces of occupation continued until the century. XI.Located near the present village of Estoi and about 8 km from the city of Ossónoba (now Faro), Milreu benefited from mountain springs then there existing, whose water was driven by gravity, satisfying the everyday needs of rural and also strong experience playful.In the fourth century was erected a temple richly decorated and kept still until the start of the vaults, for the private worship of the owning family. The temple was Christianized in the fourth century. In this period created a cemetery with graves surrounding the podium and with a small mausoleum.In the fifteenth century on private divisions of ancient Roman house was erected a house / fortress, with strong cylindrical buttresses, which now constitutes a unique example of civil architecture rural.The villa Milreu have a dimension of tens of hectares. Archaeological excavations have revealed a significant amount of archaeological finds, including the collection of mosaics is the most important estate, highlighting the still grounds relating to the marine environment.The coatings with marmóreos dating from the third century AD, enhances the taste for oriental customs through the use of marble of various colors that sometimes coat the entire surface of a room.The decorative pottery, as the brick was applied when the marble was scarce. The artist’s imagination, taste and fashion of the commissioner of time, provided the parts where getting translated the effort and passion for beautifying the town.Thus, the walls of the finest divisions of the house were covered with rich marble and stonework in the form of pilasters addorsed to the walls, topped by Corinthian capitals, or naturalistic elements.In the intermediate spaces, the walls plastered received the paintings in fresco: geometric compositions or paintings inspired naturalist simulated idealized landscapes. The location of the former is, in most cases, footers and only rarely on other areas of the walls or vaults.In Milreu, you can see some traces of parietal decoration.Decorative sculpture are striking portraits of emperors Agrippina, the young, Adriano and Gallienus.The spaces intended for visitors in villae, as the atrium, the peristyle gardens, fountains, spas ninféus and were often decorated with carvings. 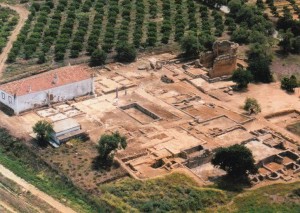 Memories of MonumentThe discovery of the ruins

Since its discovery in the sixteenth century, the ruins of Milreu been the target of several considerations on the purpose for which they had intended. Defended ones – André de Resende (XVI century); D.Francisco Barreto (seventeenth century); Father Lima (Séc.XVIII), “the website of Milreu” was the former headquarters of Ossónoba (now the city of Faro). In years 30-40 century. XX, Abel Viana Lyster and Mario Franco, supported by research of a geological / archeological, argued that the former Ossónoba be tracked in Faro, where the current is off da Sé Milreu would then, in your opinion, a resort luxury and rest to enjoy the Ossonobenses.The first archaeological investigations were carried out by Milreu Estacio da Veiga in 1877. Followed him Botto Canon Pereira, Santos Rocha and Leite de Vasconcelos. In the twentieth century – the ’60s – the German Archaeological Institute, provided important archaeological campaigns in Milreu, directed by Theodor Hauschil. Archaeologists uncovered put above the building complex of the century. III. Have yet to explore the initial constructions of séc.I., with mud walls based on masonry bases and on whose ruins were erected buildings more late. 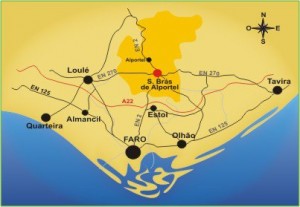