The Algarve (from the Arabic “al-Gharb al-Andalus,” al-Gharb, “the West”, the “al-Andalus”), was considered for centuries, and until the proclamation of the Portuguese Republic on 5 October 1910 as the second reign of the Portuguese crown – a separate right to the kingdom of Portugal, although in fact did not possess institutions, forums or own privileges, or even independence – in practice, it was just an honorary title on an area / region in which nothing was different from the rest of Portugal.

The only reason that can justify this new entitlement royal ties in with the tradition peninsular, to add to the monarch’s title of the achievements made (so, for example, the Kings of Leon and Castile were also “Kings of Toledo, Seville, etc. “)

With the Muslim reconquest of Silves, in 1191, the king stopped using this title.

The Almohad Caliphate would disintegrate in Hispania in 1234, dissolving into several smaller emirates, the Taifa. The South of Portugal still in Muslim hands was attached to the Taifa of Niebla, in modern Spain; its emir, Musa ibn Mohammad ibn Nassir ibn Mahfuz, proclaimed shortly later “King of the Algarve” (amir al-Gharb), since their state understood in fact, the westernmost region of the Muslim Andalusian.

At the same time, the Portuguese and Castilian conquests to the south continued. In the reign of King Sancho II conquered is the ultimate Alentejo squares and even most of the modern Algarve, on the right bank of the River Guadiana; the date of its deposition and subsequent abdication of the Algarve remained only small Muslim enclaves in Lagos, Faro, Loulé and Albufeira, which, due to the territorial discontinuity and distance that separated them from Niebla, became independent of your domain.

So, in fact, Sancho II of Portugal appears as it would the second Portuguese king to be able to use the title of King of the Algarve, in the wake of his grandfather – which probably did not only due to their other domestic concerns, namely the civil war that opposed his brother, the Earl of Bologna and infant Afonso.

Indeed, it was this that ascended the throne in 1248, undertook the conquest of their last Moorish enclaves in the Algarve in 1249 assuming the title of “King of Portugal and the Algarve”, which no longer would be used by his successors until the end of the monarchy in Portugal. 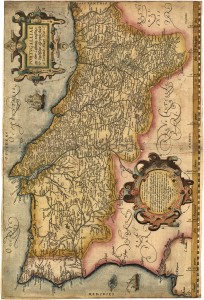