The Convento de Nossa Senhora da Assumpção is a “remarkable” building in Faro where currently operates the Municipal Museum of Faro (formerly Municipal Archaeological Museum and Infante D. Henrique) and that includes various collections of paintings, sculpture, archeology and archaeological remains Roman and medieval. Located in the “old town” (Vila-Adentro), was built in 1519 in the old Jewish quarter of Faro in order to receive a Franciscan community who followed the teachings of Santa Clara. The choice of location for building the convent was in a prime area of ​​the city, situated in Vila Adentro, along one of the input ports (the Home) and a semi-abandoned site due to the expulsion of Jews in 1497. 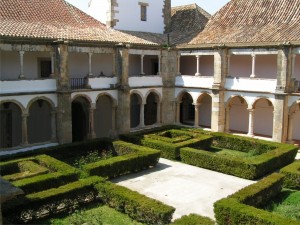 The construction of the convent lasted for over forty years, with the royal patronage of the Queens Leonor grantee City and Manuel I woman, from 1519 to 1525 and of Queen Catherine, wife of King João III from 1529 to 1550. The most active phase of the yard, had the architect Afonso Pires and from 1561 to 1564, under the Diogo Pires orders. The convent is to highlight the Renaissance style, with a Manueline church and baroque dome.

Extinguished the religious orders in 1834, the convent passed to the hand of individuals, including having served facilities of a factory of cork stoppers, in the early twentieth century.

However a National Monument, the town bought the building in 1960 for installation of the Library and Municipal Museum.

Despite the looting carried out by British troops of the Earl of Essex (who also attempted against other buildings in Faro in 1596) and the 1755 earthquake is one of the best examples of the first Renaissance in the Algarve.