The Guadiana or Odiana river is a river of the Iberian Peninsula which rises to an altitude of about 1700m, the lagoons of Ruidera, in the Spanish province of Ciudad Real, in the Ojos del Guadiana reborn and flows into the Atlantic Ocean (more precisely in the Gulf of Cadiz) between the Portuguese town of Vila Real de Santo António and the Spanish Ayamonte. With a total course of 829 km, it is the longest room of the Iberian Peninsula. The watershed has an area of ​​66,800 km², located largely in Spain (about 55 000 km²). 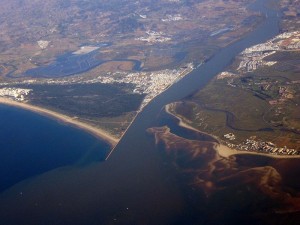 Runs along the southern Meseta in east-west direction, near the Spanish city of Badajoz, take the south direction to the mouth. The Guadiana border between Portugal and Spain from the river Chança to the mouth. In the section between the Caia river and the creek Cuncos the border is not demarcated due to the border dispute of Olivenza, between the river of Olivenza and the creek Táliga.

The Guadiana is navigable until Mértola a distance of 68 km. In his Portuguese course was built Alqueva dam, in the Alentejo region, which created the largest artificial lake in Europe.

The Romans called it Anas (“ducks”), to which the Moors joined wadi (the Arabic word for “river”) and then the Wadi Ana, through the Portuguese as Ouadiana and later still to Odiana. However, since the sixteenth century, for spanish influence, it was gaining ground Guadiana form (cognate other Arab names designating rivers and passed to Castilian with the initial form guad as Guadalquivir, Guadalete, Guadalajara or Guadarrama), and today days, the established way.