Cacela Velha is a village located in a sandstone elevation in front of the Ria Formosa and the sea (Vila Nova de Cacela parish, Vila Real de Santo António), from where it sees the most beautiful panoramic views of the eastern Algarve. The Old Cacela designation is recent, as this place was known as Church site. 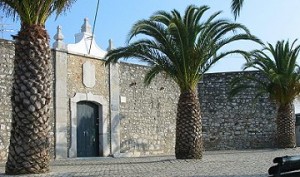 For many the most beautiful part of the Ria Formosa, admirably preserved its charm and serenity. The beautiful walled town of Cacela-a-Velha, founded upon a fossil cliff with about a million years, it is contemplated the Ria Formosa and the barrier island where is located the sea beach.

Constituted crossing point for Greek and Phoenician navigators, and according to some authors have been Cunistorgis, the ancient capital of Cuneos. The Romans expanded it and the Arabs gave him prestige.

Cacela goes, in 713, to Muslim rule during the campaign Abdelaziz (son of Muça) in the Algarve and Alentejo. The Algarve coast was under the control of Yemeni and Syrian Arab clans, Cacela being dominated by Arabs from the group of Banu Darraj.

Cacela was a relatively large population of heart (district) of Ossónoba (Faro). His name was Hisn-Kastala, Qastallat Dararsh, Cacetalate or Cacila (meadow or cattle grazing), from which derive the current name.

It was defended by a castle dating from the IX-X century, the caliphate of the time, and would extend out of the walled enclosure, featuring a sea-agricultural nature.

During the Islamic period and the Middle Ages was an important population center, having been conquered from the Moors by D. Palo Peres Correia in 1240. According to legend, after the conquest of Cacela, truces were dictated, but seven Christian knights were killed treacherously by the Moors and so the fury of D. Palo came over Tavira and won it.

On July 17, 1283 D. Dinis granted charter to Cacela. Cacela in the county were integrated portions of existing parishes of Odeleite and Azinhal.

During the fourteenth century due to changes in the coastline and the constant pirate attacks the population began to leave the village and from inland, spreading by farms and farms of the rich agricultural lands stretching down the mountain. This trend will have accented especially since the Age of Discovery. While maintaining maritime activities, Cacela acquired a markedly rural nature.

Paper notes from 1465 no houses beyond the castle where the commander lived. Drawing 1617 shows an urban center consists of fortress, church, prior of the houses, home of the camera and pillory. The inhabitants lived outside the village. 1621 comes the “Relationship and Moth Cacela village,” Alexander Massai.

With the earthquake of November 1, 1755, “in Villa de Cacela (…) it ruined the Matrix, the Misericordia, the Chamber of Cazas, and will Fortaleza visinha fell the ramparts contanta violence, which threw the beach mounted cannons” [ in “Relaçam anno of November 1 the earthquake of 1755. With effeitos, which particularly cauzou this Kingdom of the Algarve”.
The “Charter of topographic vacant and fallow lands of the term of Casella village (…) in 1775″ shows an urban center consisting of church, fortress, pillory, priest houses, chamber and string and houses the governor.

The Cacela peninsula is a dune system which is located on the east edge of the Natural Park of Ria Formosa, whose isthmus is next from Manta Rota Beach, and that by 2010 ended in Barra do Lacém; then this shoreline had two beaches: the Old Cacela Beach and the Beach Factory. Due to the opening of a new bar that year, currently the Beach Cacela Velha is located on the western end of the peninsula, while the Beach Factory occupies a sandy islet south of the village that gives it its name.

By separating the Ria Formosa sea, the peninsula protect this lagoon formation and all its natural values against the ocean thrusts. The whole peninsula is a sandy dune system covered by endemic vegetation that protects the natural erosion.

The beach of Cacela Velha

In 2009 the beach of Cacela Velha was considered one of the ten best beaches in Europe for practicing caminhadas.2

The sandy peninsula due to its isolation, is away from the big flood of tourists that characterize other seaside resorts in the region. It is therefore much frequented by lovers of naturismo.3

Despite the limitations imposed by protected area, some world have invested fortunes in the region.

The beach of Cacela Velha is also popular with the gay and lesbian community and is considered the best beach in the country for this tourist segment, along the beach of Costa da Caparica 19. A beach figure in several national and international LGBT guides.