Castle of Silves, The Moorish Castle

From archaeological excavations, it is assumed that the first fortress on this site consisted of a Lusitanian castro. It is believed that Phoenicans, Greeks and Carthaginians traversed the site at one time, but that around 201 B.C. the Romans conquered Silves, transforming it into a citadel of their occupation, and commercial center that prospered for the next five centuries.

Around 716, the Visigothic citadel was conquered by the Umayyad Caliphate who reinforced the existing fortifications with a new series of walls. This new period resulted in a great period of development, under the Moorish occupiers, that include the extensive walls in the west.

In 1160, it was sacked by Ferdinand I of León and Castile, but remained only for a short time in the hand of the Christians: it was quickly recaptured by the Moors. King Sancho I of Portugal, supported by the powerful Crusader army, conquered the city, after a prolong encirclement in 1189. But, a grande army, under orders from Amir al-Mu’minin, in 1191, retook the city. The buildings of the Taifa kingdoms of the 11th century, which includes the Palace of Balconies (where Al-Mutamid, lived as the poet Ibn Amarhe) progressed in the 11th century. The walls and towers that today represent the Castle of Silves came from these campaigns and public works by Almoravides and Almohads in the 12th and 13th centuries. The castles internal water catchment, and large rain fed underground cistern were used to provide freshwater for the surrounding dwellings (to as late as the 1920s). It would only be in the 13th century, during the reign of Afonso III of Portugal, that forces under the command of D. Paio Peres Correia, would definitively take the fortress. 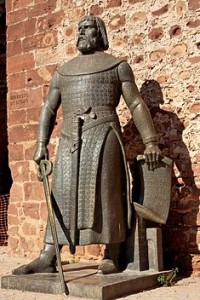 A statute of Sancho I of Portugal whose forces, supported by an even stronger Crusader army, conquered the citadel of Silves in 1189.

A foral was issued in 1266 by King Afonso III of Portugal. In order to expand the influence of Portuguese control, this foral was then supported by residential concessions from King Denis (in 1305), that were later repeated in 1380, under King Fernando I of Portugal. But, even naming Prince Henry the Navigator alcalde for Silves (in 1457), and new concessions in 1487, under King John II, little development occurred in the territory.

On 1 November 1755, the castle was damaged by the Lisbon earthquake, resulting in the “…loss of its cathedral, tower, castle and walls…”, as identified by Moreira de Mendonça (1758). Sometime during the 18th century, the dungeons were reconstructed, following the earthquake, and the ceilings repainted.

The castle consists of an irregular polygon implanted on a hilltop overlooking the community of Silves, comprising four towers and seven crenellated posts, linked by walls with ardaves.

Two gates, the principal one between two towers and the Traitor’s Gate carved into the northern wall. Alongside the principal gate is the guardhouse, constructed with a vaulted ceiling, and covered in tiles.

Within its courtyard are various subterranean structures, with accesses at soil level. The Cistern of Moura, is a 10 metres (33 ft) high, 820 square metres (8,800 sq ft) superficial area, with five naves marked by four orders of columns, interlinked by semi-circular archways. The Cisterna dos Cães, within the courtyard, is a vertical hole of 60 metres (200 ft) depth, that also supported water supply in the castle.

On the second floor of the Governor’s residence, there are two halls covered in painted wood. One of these halls includes a painting of royal arms, framed in shells and acanthus leaves, while on the four lateral panels, are military “trophies” comprising suits of armor, flags, lances, canons, muskets and drums. In the other hall is an allegory of Mars flanked by figurative and floral medallions.

In the military square, and alongside the southwest wall, are the vestiges of a house, presumably the residence of Prince Henry (when he was thealcalde of the Algarve), that includes foundations in dirt, a stone staircase (with a sigle on one flight), a spacious living room with the remains of a vaulted ceiling, olive oil press and pesto.

The visitor and interpretative centre within the shadow of the castle. 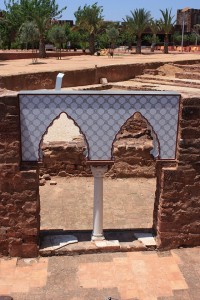 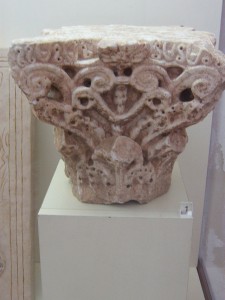 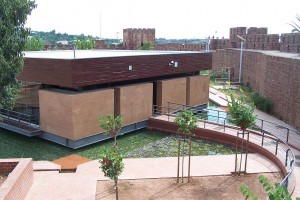