The Serra do Caldeirão marks the border between the coast and the Algarve Barrocal and peneplains the Alentejo. It is part of the massive old and consists of schist-greywacke rock that originates thin and not very fertile soils. Its highest point is located in the Algarve (589 m Peeled – Cauldron horses – Loulé), the Mu (St. Barnabas – Almodovar) the 2nd highest point with 577 m. In the municipalities of Tavira (Alcaria do Cume 535 m), São Brás de Alportel (Mint 515 m; Quatrelas 521 m, 529 m Eagle) and Loulé has several points that exceeds 500 m. 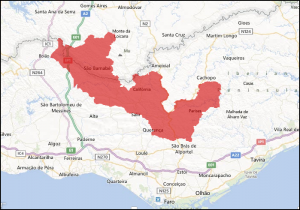 Despite its modest altitude, form a very peculiar landscape, where rounded elevations, the hills are cut by a dense river network, consisting mostly of temporary waterways. The relief is for this reason fairly rough at several points.

The  Serra do Caldeirão has considerable climatic influence. It constitutes a physical barrier to the passage of the cold winds of the North and Northwest quadrant of depressions, contributing to the existence of a Mediterranean climate in the Algarve coast, with low annual rainfall and mild temperatures in winter. On the other hand, is also a condensation barrier for winds wet South quadrant.

The average annual rainfall varies: in the higher areas of the municipality of Loulé are greater than 800 mm per year, but as we approach the border with Spain to the east (Guadiana valley), go down until they are below 500 annual mm in the regions of the Algarve Northeast.